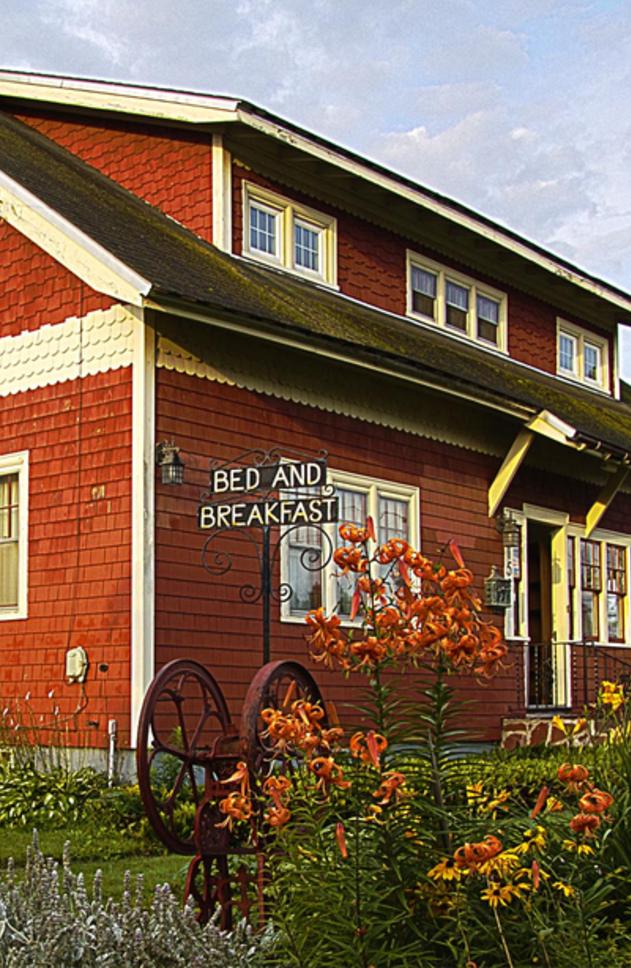 Welcome to The Old Iron Inn Bed and Breakfast

Early flat irons were made by individual blacksmiths and each is unique unto itself. A trained eye can see the human labor that went into this artifact, as the iron in some respect reflected the soul of its maker. The body might show the layers where cooler portions of the raw ore were folded and mixed. The handle is simply a bar of iron, but twisted to provide an ornamentation as well as practical gripping surface. These primitive irons do not have the high values of primitive pine furniture, but there still is a sense of being close to the maker; the artifact serves as a wormhole across time.

"So THAT'S why it's called The Old Iron Inn!"

A brief primer on the history and variety of old irons

We have had people stay with us for several days who suddenly smack their foreheads and exclaim, "So THAT'S why it's called the Old Iron Inn!" We thought it was obvious: the house is full of OLD IRONS; you know, those little heavy metal things your grandmother used to take folds and creases out of clothes.

Interestingly, most clothing or pressing iron collectors - at least in our experience - are men, who are apparently attracted by the considerable variety in style and technology. A household of a century or more ago would have had a number of different irons for various types of clothing. In any given period, the irons a household would have had varied considerably with the household's resources and region. These factors, along with the steady introduction of new technologies and marketing, have produced literally tens of thousands of distinctly different irons just in American use, and many times that when the irons of other nations are included.

Beyond the incredible variety, there is a surprising beauty about old irons. These were utilitarian household items, and yet throughout history the iron builders and manufacturers have lavished attention to form as well as function. Irons very commonly have smooth and attractive lines and often sport special details and embellishments. The human urge to build and market "a better mousetrap" has resulted in a seemingly infinite number of clever gadgets to make the iron useful for a wider range of clothing or keep the iron hot without burning the hand.

With the coming to America of foundries and mass production in the early 1800s, molten iron was simply poured into molds and a handle attached. We lose touch with the individuality of the worker who made the iron, but we can see the mental calculations of the designer or inventor. How can this mundane item produced by the thousands be made more desirable, at less expense? A cross-hatched design might be put on the handle. The bottom has a polish or the top beautifully encased in chrome. A great idea that was patented advertised the iron's design as keeping the handle cool even while the base is hot.

The term "flat iron" usually refers to a single-piece iron intended for general use on clothing. These were heated on the stove or near a fireplace, as they do not have an internal source of heat. Typically, flat irons have a sole of roughly triangular shape, flat at the back, with the other two sides slightly rounded. Other shapes also occur, such as a rounded back or forming a point on both ends. By and large, flat irons rarely have values that exceed $50, and typical irons in good condition sell from $10 to $20.

The flat iron could be an international symbol for drudgery. The iron was heated until very hot, in a workplace that could not have been comfortable. For the most part, the irons were a single piece of metal, with the handle just as hot as the base. The iron was gripped with rags or gloves to keep from burning the hands, but they were never easy to use. Keep in mind that these were used in a time of heavy clothing, without fans or air conditioners, or bug spray, or any artificial light. It must have been hell, by the standards of our day.

Various innovations were tried through the 1800s to create a cooler handle. Some handles included holes or slots to better dissipate the heat. Rare examples in the United States had wood handles and, since the user might not be using the usual gloves, a shield to keep the hand from touching the hot iron. A variety of insulating materials was tried between the base and handle. An example is the Hood soapstone irons, patented in 1867, that have a slab of soapstone between the metal sole and handle. The sole plate on these irons is fairly thin, and we guess that these irons did not hold the heat as well as its all-iron competitors, so the cooler handle came at a cost in efficiency.